“Here is an awful case that shows that combined with bad advice, a lack of compassion and Universal Credit can and does ruin a persons life.”

Today was extremely busy, mainly because we now have a new influx of people needing help that had previously been signing on at Stalybridge Jobcentre which has recently been shut down. The impact of a Jobcentre shutting down is massive and it can’t be underestimated, especially in rural areas. How on earth can they expect claimants to walk miles to their nearest Jobcentre is beyond me. But i do know that this is a calculated and cruel move by the government to make it extremely hard for a claimant to fulfil their Jobseekers Agreement, therefore resulting on more sanctions etc.

Here is an awful case that shows that combined with bad advice, a lack of compassion and Universal Credit can and does ruin a persons life.

Please note that this is a true, honest account, and nor am I passing on any personal details as requested.

As soon as I arrived I saw a man shuffling out of the Jobcentre, I could see that he was unhappy and needed help. After four years I’ve learnt to recognise the signs.

As soon as I said hello to him, he started to tell me about his problems. He will remain nameless for respect for him and also so that he doesn’t get any repercussions from the DWP.

He told me that he had been sanctioned again, he didn’t know why and his advisor wouldn’t tell him either. He was told to phone up the 0345 number which at the moment costs a person up to 55p a min to phone. He waited for ages to speak to someone and then he ran out of credit, so now he can’t use his phone.

He had always worked since the age of 15, until he had a heart attack five years ago. this left him unable to work so upon advice given he then claimed ESA. This was going ok for a while until he attended an ATOS medical, when they declared him fit for work. He clearly wasn’t. So he appealed this decision, won his appeal and reclaimed his ESA.

The stress of this didn’t do him any good so he became ill and had to be admitted to hospital for a heart related illness. The consultant advised him to stay away from stressful situations. Easier to say than do though, especially when he was called up for another ESA medical.

They declared him fit for work so he then went to the Jobcentre to try and claim Jobseekers Allowance until his appeal was accepted. However his advisor told him that he had to claim Universal Credit. He had no choice and nor could he appeal the ESA decision. We know that this is wrong, but this is what they are doing to people folks.

He then went ahead made his claim and was told that he had to work, he had no choice. So against his consultants decision he found a 16 hour a week job, which was supposedly topped up by Universal Credit.

He ended up far worse off financially because the way that universal credit is worked out it actually makes a person worse off in work and he was effectively working for 33p a hour.

Then his hours were reduced to 10 a week. He knew that he couldn’t survive on this, and he also knew that he would be punished by the Universal Credit system for the decision that was made by his employer. He was told to find more hours to work or there was a possibility that he would be sanctioned.

As a result he became ill because of the stress and couldn’t cope. He has subsequently been sanctioned and has had no money for a few weeks.

Straight away I reassured him that we are here for him, that we can help him. He told me that he was close to committing suicide, and was serious about it, but our kindness has made him rethink this. He didn’t think that anyone would help, because no one cared. I told him that we do care and that we would help him to sort this out.

I gave him a food parcel which he was overjoyed at recieving, I don’t think that he has eaten anything decent for a while. I then telephoned his local MPS office and asked his team if they could see him asap. Because his case is complicated, and there is more to it than I have explained above, seeing his MP is essential. There’s nothing like a letter from an MP to get things moving, because if there is one thing that the DWP hate is an MP becoming involved in a case. I did also inform him of other local organisations, but he said that he wasn’t ready for them yet but maybe he will be after he has spoken to his MPs office.

I know that he will be treated with the upmost respect when he meets them, and they are a great team. Remember folks, go and see your MP if you can. Even if they are Conservative, because they need to hear your problems, even if some won’t deal with it then need to hear them. I’m now confident that his life will improve.

“The worst thing is the constant cold”

A severely ill woman has lived alone by candle light for a year without electricity or gas after her benefits were axed.

The 56-year-old lives out of a crumbling living room in Walton with only a stained sofa and duvet to keep her warm.  According to Ms Cross: “The worst thing is the constant cold.”

This only worsens her deteriorating health: she has anaemia, type two diabetes and a chest infection that often causes her skin to bleed.

Ms Cross, had her Employment and Support Allowance cut last year and can no longer afford electricity, gas or heating. When she does have food she has to go to a friend’s house to heat it up.

Ms Cross, from Liverpool, lives out of a derelict and damp room where both the flooring and wallpaper is peeling off. She said: “It’s getting to winter. There are times when I’ve wanted to go up to the candle for heat. Even under the quilt I can still feel the cold. When the electricity goes off, I’m in total darkness. I can’t even read a book. It’s too cold to even get out under the duvet and get a biscuit. Normal houses are warmer than this, aren’t they?”

Ms Cross has been receiving benefits since she left school. But they were cut last year after she failed to turn up to a medical assessment because she had to go a doctor’s appointment.

She said: “I used to get Jobseekers Allowance even though I’ve told them I’m not well enough to work. “If I’m too ill to work, how can I look for a job? And how can I look for a job if I can’t use a computer? When they stopped the benefits last year, that’s when I felt I was in a situation where I didn’t know if I was going to cope.”

Without hot water, Ms Cross has been unable to wash for months and only has one soiled pair of clothes. She said: “When there’s no hot water I can’t even wash my clothes because I can’t boil a kettle.”

Although she has an electric heater, she rarely has the electricity to power it. And Ms Cross often has to brave the freezing cold on an empty stomach.

About 900,000 disabled people will see their weekly incomes fall by at least £50 a week by 2020, because of the continuing impact of the government’s welfare reforms, according to new research.

The research by the consultancy Policy in Practice found that, of 7.2 million working-age, low-income households, more than two-fifths of those containing a working-age disabled person would lose at least £50 a week, compared with November 2016.

Single parent families could lose more than £4000 a year in benefits cuts after welfare reforms made by the UK Government, a new report for the Scottish Government has found.

In recent years the Conservative government has frozen benefits payment rates and capped the total amount of welfare funding people can receive.

In Kind Direct charity warns of ‘hidden crisis’ facing thousands after it distributes £20.2m of hygiene products in one year

Growing numbers of people are facing hygiene poverty, where they are unable to afford essential products such as shampoo and deodorant, and are having to choose between eating and keeping clean, a charity has found.

A report from In Kind Direct says thousands of people are seeking help and describes the issue as a “hidden crisis”. Last year the charity distributed a record £20.2m of hygiene products, a rise of 67% on £12.1m the year before.

Robin Boles, chief executive of In Kind Direct, said: “This is hitting families hard. The fact that last year was our busiest year ever, distributing products to charities and the people they help, highlights the stark choices people are facing.”

The study has prompted campaigners to call for the government to do more to alleviate poverty. They say cuts to working benefits coupled with rising inflation have left families struggling.

Samantha Stapley, operations manager for England at the Trussell Trust food bank network, described the report as “very concerning”. She added: “When people are referred to food banks with no money for food, they’re often struggling to afford other basic essentials too.” 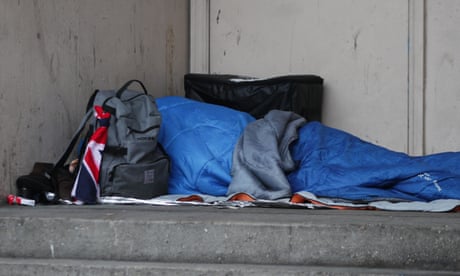 The report shows 82% of 948 charities have seen an increase in demand over the past year from people who cannot afford essential items.

A further poll of 1,000 people, conducted by In Kind Direct, found that 37% of those surveyed, and 56% of 18- to 24-year-olds, have had to go without hygiene or grooming products, or cut down on them, owing to low finances.

Stapley said Trussell Trust research with the University of Oxford had found that more than half of the households visiting the network’s food banks were struggling to afford toiletries.

She added that voluntary organisations alone could not resolve the problem and the underlying causes of poverty needed to be addressed. “Making work more secure, tackling the high cost of living and working to reduce the issues people experience with benefit payments would all make a difference,” she said.

Her words were echoed by Alison Garnham, chief executive of the Child PovertyAction Group, who said: “To tackle it we first need to ensure that benefits once again reflect families’ needs and so rise with inflation. No one should have to suffer the indignity of living without basic sanitary products.”

Analysis of the latest ONS figures show an estimated 2.4 million children live in 1.4 million households where at least one adult works in the public sector as their main job.

During a recent study of police staff by GMB, one member revealed their pay was so low they couldn’t afford to buy their children clothes.

Lying on the floor for hours awaiting help, unable to afford both incontinence pants and food … This is the reality of disability cuts for Stephen, Alex and Elli

When Theresa May was challenged by a disabled voter over cuts to her disability benefits and social care last month, it shone a light on the way Conservative policies post-2010 have disproportionately targeted disabled people. Recent years have seen the introduction of many cuts and changes – from the rollout of “fit to work” tests to the abolition of disability living allowance – as well as a lack of action on existing inequalities, such as inaccessible housing. It all amounts to an unprecedented assault on disabled people’s rights and living standards in Britain.

In a series of interviews over several months, the Guardian has followed three disabled readers – Stephen, Alex, and Elli – as they experience the reality of life since austerity.