Poverty is forcing people to have dangerously poor diets and is leading to the return of rickets and gout – diseases of the Victorian age that affect bones and joints – according the UK Faculty of Public Health.

The public health professionals’ body will call for a national food policy, including a sugar tax, as concerns rise over malnutrition and vitamin deficiencies in British children. It will also appeal for all political parties to back a living wage to help combat the illnesses.

Doctors and hospitals are seeing a rise in children suffering from ailments caused by poor diet and the faculty has linked the trend to people’s inability to afford quality food. Latest figures show there has been a 19% increase in people hospitalised in England and Wales for malnutrition over the past 12 months but experts say this is only the extreme end.

Dr John Middleton, from the FPH, said the calls would come in the faculty’s manifesto to be published next month and warned that ill-health arising from poor diets was worsening throughout Britain “through extreme poverty and the use of food banks“.

He saidthat obesity remained the biggest problem of food poverty as families are forced into choosing cheap, processed high fat foods just to survive. “It’s getting worse because people can’t afford good quality food,” he said. “Malnutrition, rickets and other manifestations of extreme poor diet are becoming apparent. GPs are reporting rickets anecdotally in Manchester, the East End of London, Birmingham and the West Midlands. It is a condition we believed should have died out.

Read the rest of this article from the Guardian here:  http://www.theguardian.com/society/2014/aug/30/child-poverty-link-malnutrition-rickets

Far too many disabled people are now being housed in entirely inadequate conditions, a situation exacerbated by government policies which in practice have had some incredibly cruel results.

Being sick is no fun. We all know what it is like to be poorly, to have flu for a few weeks and feel horrendous. Luckily, most of us recover and get back to our lives. Similarly, some of us will have experienced a period where we struggled with our mobility. A broken leg or arm is not pleasant, but again, we know we will get better with time.

For many sick and disabled people, there is often no light at the end of the tunnel when they will suddenly recover. A large proportion of disabled people struggle with ongoing mobility problems, chronic health issues, pain, and discrimination. Their home should be the one place they can feel safe and live with dignity. Instead, many disabled people have to face the misery of substandard housing and increased poverty due to an onslaught of government ‘reforms’.

Recent research, highlighted by the Observer newspaper, showed that three quarters of people with mobility problems did not have access to suitable housing. This is a disgrace in such an advanced economy. Even worse, a significant number of disabled people are social housing tenants. It beggars belief that the social housing sector is treating them this way. Yet according to Disability Rights UK, over three quarters of Disability Living Allowance recipients live in the social sector – and the sector can fail them. A report by Leonard Cheshire Disability gives a vivid example of this failure in the case of Sue Friar, a wheelchair user who cannot get upstairs and so has to wash in her kitchen sink. She cannot use her garden because her housing association won’t even provide a ramp.

Real Britain columnist Ros Wynne-Jones says instead of wishing the summer holidays would never end, too many hungry kids can’t wait to go back to school

When Thomas was eight years old, he was caught stealing formula milk for his baby brother. It was in the middle of a long hot summer in South London. His mother had given him £1 for the milk, but it wasn’t enough.

“I remember it like it was yesterday,” he says. “I went into Kwik Save. I realised I didn’t have enough money and that my mum didn’t have any more. Summer was always the worst. Too many mouths to feed, no school meals, no money. My heart was beating. I robbed a packet of SMA Gold.”

This week, in Scotland, I spoke to Lorraine, a 33-year-old single mother from Renfrewshire. This summer, she went to a foodbank for the first time in her life.

“I stood outside a long time,” she said. “I felt like such a scrounger.”

She told me her family could barely cope in term-time, but at least her six-year-old daughter Kelly got a hot lunch every day. “It’s not just the food,” she says. “You can’t afford to take them out so you’re at home with the electricity and gas building up. Most days I don’t eat in the evening at all.”

Many people think winter is the hardest time for UK families living in poverty, as extortionate fuel bills swallow the household budget. But for many living on the knife-edge of hunger, the long summer holidays are a tipping point. Free school meals, which provide over a million children with at least five hot lunches a week during term-time, are suddenly switched off on the last day of term.

Last week, a report from Kellogg’s and the Trussell Trust showed 40% of teachers believe pupils don’t eat enough during summer holidays – with many children noticeably thinner at the start of the autumn term.

“One in four children only get one hot meal a day – their school lunch,” says Carmel McConnell, who runs Magic Breakfast, a charity delivering free, healthy breakfasts to schools to reach 8,500 of the UK’s poorest children. Where do those children go in the holidays? I think this summer needs to be the last one where the answer to that is nowhere.”

Read the rest of this article in the Mirror here: http://www.mirror.co.uk/news/uk-news/skinny-malnourished-kids-long-new-4113334#ixzz3Bja5B1DC

Petition: Hold an inquiry into benefit sanctions that killed my brother

“I had my ESA assessment today and I feel totally degraded. I have had them before and they have always been difficult but this particular one was the worse I have ever felt. I understand they have to ask specific questions but when I explained that my meds sometimes it takes me longer to process the question The situation ended up where I felt like she was the judge and jury and I was on trial.

My day to day is so poor because of my mobility and my pain and I always try and stay positive but today broke my spirit and it broke me. I truly understand why people give up and do not have the fight to prove how they need help. I have gone through so much hardship in my life and today A lot of those feelings came rushing back. I literally broke down today and haven’t stopped and that is not me. Assessor are experts to help us not break our souls.”

James Dearsley, 60, receives a three-month sanction while on the Work Programme
A vulnerable 60-year-old has been left penniless and dependent on food bank support after his Jobseeker’s Allowance (JSA) was sanctioned at the end of July while on the Work Programme. South-east Londoner James Dearsley received a letter from the Department for Work and Pensions (below) telling him that he had been sanctioned from July 29 and that his JSA would not be reinstated until October 29. James, who is already in arrears with his council tax, has spent more than three weeks without social security. This withdrawal of money means that he’s already been forced to use Greenwich food bank twice.

He says the local job centre told him he was being sanctioned because on three consecutive occasions he had failed to turn up for his Work Programme appointment with a Seetec job search support club. The letter… 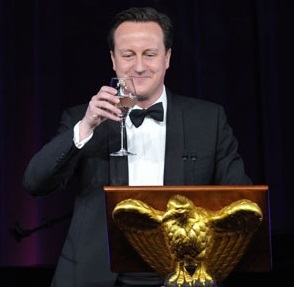 Understandably much of the rage aginst the vicious welfare reforms –  which are costing an increasing number of lives – has been aimed at blundering fucking idiot Iain Duncan Smith.

But it is David Cameron who has cheered along whilst the DWP has spent billions driving the poorest people in the country into destitution.  It is David Cameron who has been in charge whilst hundreds of hungry families have queued at foodbanks, or disabled people have been driven from their homes due to the Bedoom Tax.  And it is David Cameron who is ultimately responsible for the deaths of David Clapson, Stephanie Bottrill, Victor Cuff, Jacqueling Harris and all of those driven to ill health and suicide by his Government’s callous devastation of the social security safety net.

David Cameron probably doesn’t even know that money runs out, and that when that happens, even in one of…

Public spending in food stores fell for the first time on record in July this year, putting the UK recovery in doubt after a very worrying, unprecedented record fall in food sales, with many consumers evidently yet to feel the benefit of the so-called recovery.

The price of food  was 0.2% higher than a year ago. The Office for National Statistics (ONS) started collecting the data in 1989.The volume of food sales was also down last month, by 1.5% on an annualised basis.

There was also a marked fall in petrol consumption, and the only prominent area of growth was in spending that entailed use of mail order catalogues, and at market stalls, as people use credit to buy essential items and shop around for cheap alternatives and bargains.

You can see this image more clearly, and download the map plus the original data produced by Eurostat, the data agency of the European Union, on the Inequality Briefing website: http://inequalitybriefing.org/brief/briefing-43-the-poorest-regions-of-the-uk-are-the-poorest-in-northern-

<When I was working I honestly believed we looked out for the most sick and vulnerable in our society. Since I have become ill I have seen the truth. Every single department wants to offload your case onto someone else. My social worker has dropped me this morning as I ‘have no needs she can fulfil’ I cannot press the buttons on my PEG feeder, but that is a healthcare issue, the district nurse team won’t do it cause it is a care need, so while they decide who to help me I slowly starve to death.

I am left daily in fear and no one gives a damn.
I have tried to find help, since last May, my husband is away and I am alone and no one wants to help me.
What a truly horrible world we live in.
This country should be ashamed of itself.>

Benefit tales
Create a free website or blog at WordPress.com.